Resident feedback: ‘We are called terrorists, extremists… because I suppose we confront drivers with their guilty conscience’ 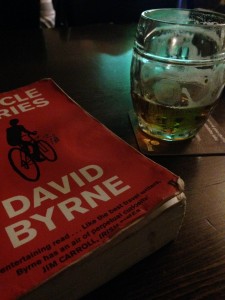 Having finished David Byrne’s ‘Bicycle Diaries’ (recommended), my ‘holiday’ reading has now moved on to Sir Peter Hall’s ‘Great Planning Disasters’ (highly recommended), written at the end of the 1970s. One chapter details London’s struggle to make a decision about its road network from the second war onwards, knowing it had a potential congestion catastrophe emerging. Post-war Abercrombie-ism promoted fast movement and meeting the inevitability of demand for new roads caused by exponential car ownership; later community activists and leaders rejected this vision, calling instead for a curbing of demand. Peter Hall notes at the end of the chapter: 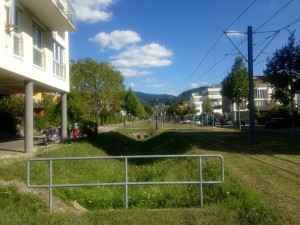 That gentler vision of the 1970s ‘good life’ persists today among many people, including strong resistance to the car, exemplified in Freiburg’s two recent fringe settlements. Housing developers reading this blog will know that Freiburg has long been held up as an exemplar green city in the Black Forest, building something like 7,500 new homes in two areas to high eco-standards, adding to its existing 100,000. The more radical community is the 2,500 home Vauban district, created on a former French barracks site via a (somewhat testy) planning and building process negotiated between the city and a number of local activists and Baugruppen. There are three themes at Vauban which I found engaging: the bottom-up decision to minimise car use (surely impossible?), the quest for genuine energy saving (not just fine words) and the use of innovative development and building management financing and processes. 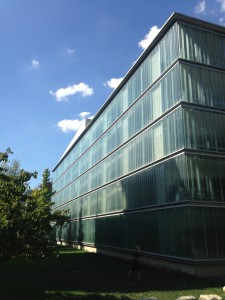 I am forever being told that ‘we can’t sell that’ in London, ‘that’ being a home without a parking space. Everyone I spoke to in Vauban (and there were a fair few) was totally committed to the idea of either not having a car, or at least parking it in an expensive neighbourhood garage away from their home. Car ownership is down at 17%, streets are almost spookily quiet, children are able to cycle or run freely and use the roads as impromptu blackboards. Conflict can occur if people (often visitors) leave their vehicles outside homes for longer than they should, but I did not see much evidence of misdemeanour; a city law prevents Vauban residents from owning a car without having a garage space, and self-policing of this draconian regulation seems to work. Outsiders can’t help being rude about Vauban, which for them is full of extremists and nutters; nutters, of course, who are proving (annoyingly) that life without a car is not only possible but rather attractive. (The frequent tram, incidentally, slides masterfully into both Freiburg schemes down the main street, as if coming into an Olympic stadium on its final marathon leg: one almost feels like applauding it…) 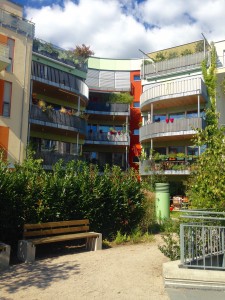 Andreas is one of the original residents in the settlement, with multiple narratives about the place and its evolution. The energy centre beneath his block contained a small combined heat and power plant (CHP) as well as a heat recovery ventilation system, items which terrify London developers on that small scale, but which clearly pay their way here. I asked Andreas what the key lesson was for him from being deeply involved in getting his block, and indeed the whole project, off the ground and built. The answer was surprising, but rang very true to me: the devil is in the detail – in fact, in the very many, many details which make up true ‘sustainability’ (a word we both dislike). Perhaps it’s boring and hard to spin into PR, but authentic green buildings are only created through consideration of e.g. every window junction, speccing the right CHP, the precise degree of solar shading needed. It’s craftsmanship, thought and hard sweat which make step changes, not ‘eco-town’ labels, but this stuff is hard to disseminate or get people excited about. And lastly, it’s about incremental learning too. Try something out, monitor it over a few years, do something else – change the building if it’s not working as expected. As the residents gradually pay off their loans, they can afford to make some group decisions about installing some newer or more efficient technology in their buildings as it emerges from the market. 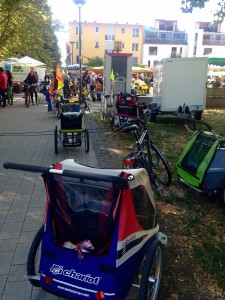 It’s these co-operative models, including very low-income groups, which dominate the scene at Vauban. But how can those people afford to finance their buildings? Through a combination of state loans and individual loans (crowdfunding if you like) requiring very low returns, as well as specialist bank loans and sweat equity (residents working on site). The low rents then do cover the loan interest as well as the running costs, and the land is of course cheap – the essential key to unlocking this kind of grass roots development activity. What’s even more surprising is that at 20 years old, some buildings are now beginning to be debt-free and their very modestly-waged residents can consider either improvements or more development. Buy-outs are prevented through a mechanism called Mietshäuser Syndikat, a company which takes shareholdings in this kind of property (at the behest of residents) and constrains its partial or whole future sale in perpetuity.

Anything wrong here? One resident complained that the eco-warriors were cliquey, arrogant and argumentative. One said that whilst the green aspects had been well thought through, accessibility by wheelchair, buggy or scooter was poor. Some graffiti indicated that gentrification was a concern: but there was not time to get under the skin of all of that.

No cars? No greenwash? No speculation? I think I’m dreaming…

PS: In Rieselfeld, perhaps the less good-looking sibling to Vauban, a significant resident (God) has the best home: a totally unexpected bit of concrete church Architecture, whose monumental sliding walls allow the Catholics and Protestants to separate or coalesce depending on the occasion. Now that’s co-housing. 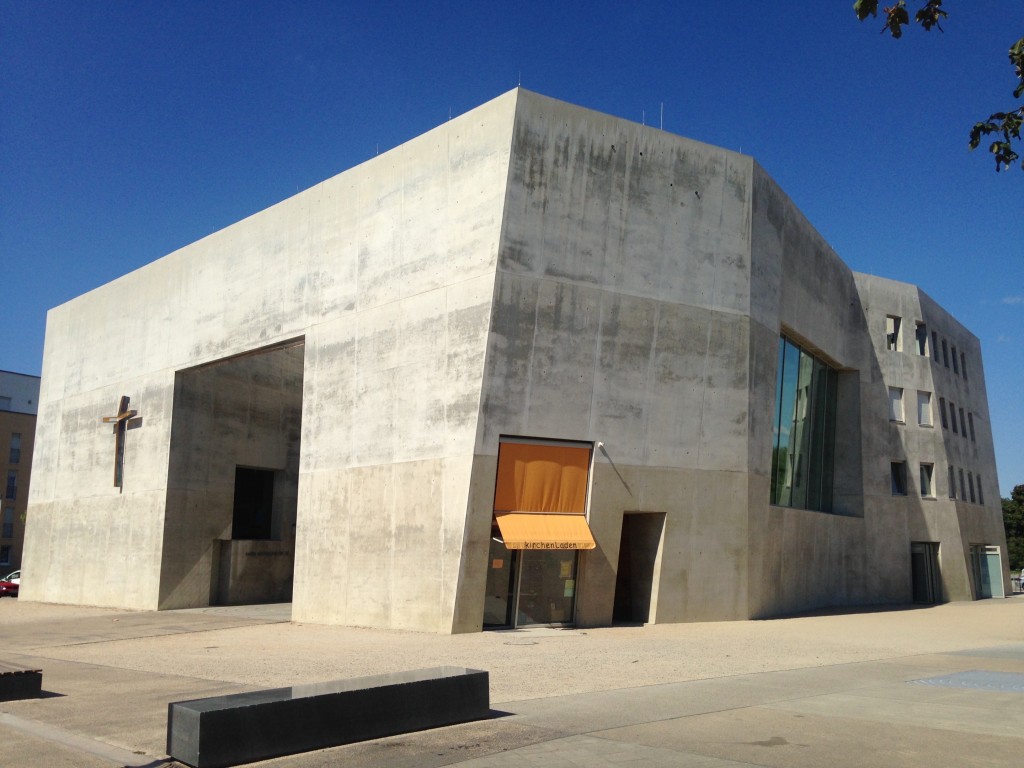