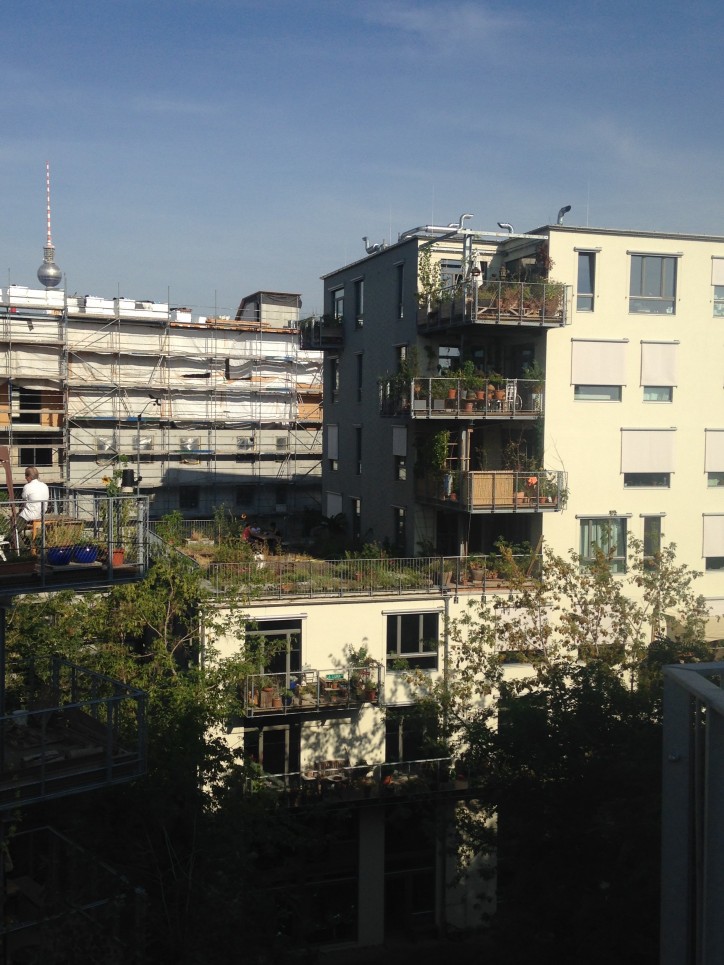 Resident feedback: ‘The location is wonderful. I’m less happy about the rats…’ 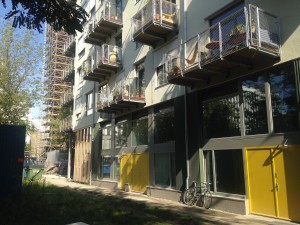 Berlin feels, in a good way, like a massive work-in-progress compared with London, which can seem like it’s ‘finished’ and we’re just tinkering with it. Enormous lots lie empty, abandoned, graffiti-ed, boarded up – sites which would be covered in boxy, shiny aluminium cladding now were they in zones 1 to 3 of the UK’s capital. The war and the wall have allowed Berlin’s progress towards the whirlpool of Global Real Estate to be a slow one, where its citizens retain an air of ambivalence towards (or outright rejection of) its embrace. The co-operative housing scheme I visited on the Spree epitomised all of this in miniature: it was informal, unfinished, evolving, and was created through determined entrepreneurship and initiative. The proliferation of various types of Baugruppen (‘Building Group’) projects in Germany’s capital is testament to the survival of Berlin’s culture of collectivism – it did not die after its heyday of the 60s and 70s. And it isn’t just ‘alternative’ students and graduates who are choosing this life and making it happen: this scheme and many others have older people as a part of or a driving force behind their existence – the people who invented this tenure in the first place! 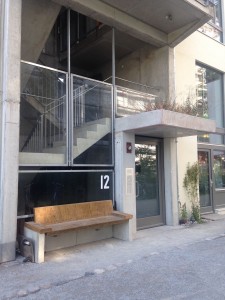 Standard developers weren’t interested in the site, despite its location on the River Spree (only 1500m from Alexander Platz), due to its long and narrow access route from the main road. The co-op members seized on this outstanding opportunity, gladly making their development car-free with subscription to a car club only. Three sets of architects worked on the three Passivhaus-standard ‘houses’, which contain somewhere between 15 and 20 homes each, depending on how you count the WohnGemeinschafts (WG) or cluster flats which take up a floor in some blocks (small private areas surrounding shared kitchens and bathrooms). The co-op is formed and owns and runs the development; all the flats are shared ownership, and the shares are capped at a maximum value of 50% of the market value of the home (to curb speculative behaviour). My understanding is that the price paid e.g. for a two bed home on this basis on this site is in the order of £120k maximum share, with a monthly payment in addition to cover the costs of the residual debt and estate management. Quite how this is viable with respect to the land price paid is not clear, but the lack of profit requirement, marketing costs and cheap build must help, as does the availability and affordability of sites in Berlin (albeit reducing). 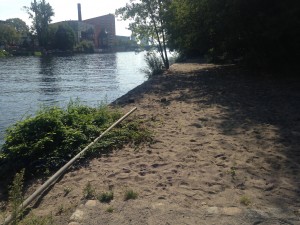 This is the fundamental difference to London’s scene, and the one which makes such schemes virtually impossible there. The other key difference is finance and legals: whilst it’s still a fairly involved process in Germany to get development finance and mortgages as well as legal agreements for co-housing schemes, there are some standard documents now which are understood by the relevant institutions: in fact, some lenders positively welcome the schemes. We’re not there yet in the UK because this activity is still very fringe. And it’s not only lawyers and lenders in the UK who don’t get this tenure: planners would also have a major issue with the uncommitted elevations and landscape, which will evolve over time as tenants inhabit the ground floor. 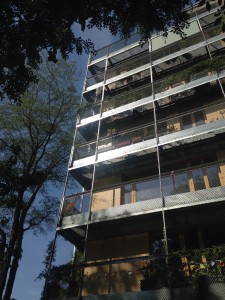 Living collectively, as I have already discovered, is not for the faint-hearted. The Spreefeld scheme demonstrates all the ways in which this is true. The garden is ungardened to a point which would trouble the average British sensibility, some ground floor spaces have been clad in workman-like ply and in general, the built fabric is clearly cheap and looks ad hoc in places. Flats are built to shell only and completed by their shareholder. The ‘territory’ is deliberately open to the public, roof gardens are shared by residents, meetings take place in the garden and there is a very informal yurt community (Tee Pee land) just along the river path. The co-op has offices on site, and there are sub-groups of residents who deal with particular issues: the energy centre, managing the commercial units and renting out spare units to refugee families being some examples. If you are now shivering with anxiety, you would not be alone, but the mature trees, balconies bursting with late summer plants, the secluded beach (literally) and multi-million pound views might calm you down. A New Zealander I spoke to at the famous R50 Baugruppen scheme down the road was clear that the Anglo-Saxon heart could not cope with this way of living, though she did hint that collective decision-making had its trials, needing a moderator to keep order during the development phase. (This scheme was less informal and for me struck the right balance of efficient/cheap build with style and order.) 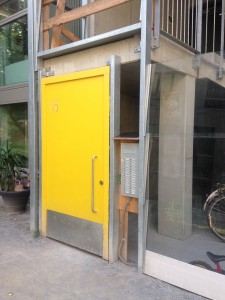 It is often architects who are leading these Berlin schemes now – much as they did in earlier periods in the UK. The architecture at Spreefeld is very much in service of the co-op, with zero pretension and maximum focus on affordability with a few flourishes where possible (mosaics at ground floor on one building e.g.). My guide worried that the co-operative movement may be on the wane as the city of Berlin, following its post-wall spending boom, is tightening the purse strings and selling sites to the highest bidder rather than assessing bids on a qualitative, ‘societal benefit’ basis. Just across the river, a very slick, corporate development has raised hackles in the city: part of the wall gallery was demolished (albeit replaced) to facilitate development, and the resulting homes are expensive. Public land (relatively plentiful in Berlin) is such a precious asset in this respect: I hope Berlin’s leaders do not entirely sell out to assuage short term financial anxiety.

Thanks to Florian Koehl and Claus Friedrichs from FAT Koehl architects, the latter being our expert guide.