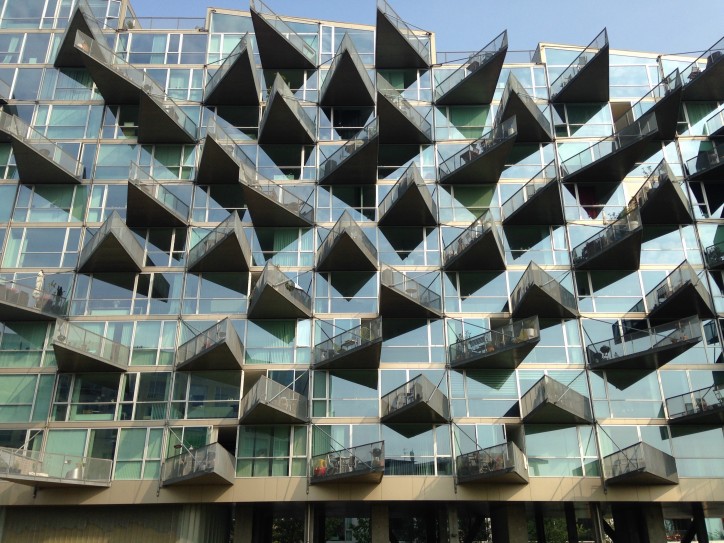 Resident feedback: ‘The urban plan is weird but this location is perfect between the city and countryside and I like the shared hall which residents can use.’

Today I found the restaurant at the end of the universe: it’s at 8Tallet, the figure-of-eight shaped building at the southern tip of Copenhagen’s bizarre new Ørestad district. It’s telling that the café looks hopefully out across a pond towards the open fields to the south rather than towards the strip of new housing and offices stretching for five kilometres towards the main city to the north. Ørestad was created to address three issues: Copenhagen’s desire to grow as a business centre, housing its expanding population (1.6m and increasing by 10,000 per year) and funding of the city’s new Metro system. A 300 hectare finger of land, formerly common land, was pressed controversially into service and masterplanned chiefly as a new business district, also including about 7000 homes. But the resulting ensemble of outsized roads and parks, glass box offices, twin-tower hotel/conference suite and trophy housing pavilions complete with an airport-style high level shuttle railway bravely cutting through, can only be described as Orwellian. The pedestrian is clearly an anomaly here where the road rules, a throwback to new towns circa 1970 – something I was not expecting from a progressive Scandinavian city. The mega-mall Field’s was introduced in a panic move during the recession, only adding to the sense of under-population of the public realm. 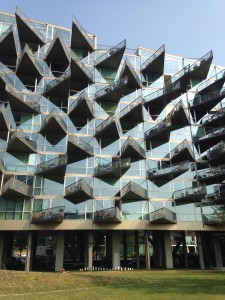 Within this dystopian framework, BIG and PLOT (appropriately named for Ørestad) have undertaken some fascinating experiments in housing typology. The Mountain House creates an artificial Italianate hillside town over a cathedral-like car park (an attraction in its own right), causing the building’s circulation to be the most elaborate, exciting-but-bonkers I have ever seen. The VM House recalls Le Corbusier – a slab block on pilotis with a bicycle-strewn landscape running freely below – but with added expressionism courtesy of sculptural triangular balconies. [Bikes feature heavily in Copenhagen and their storage is a material spatial and visual element of the ground floor programme for new housing.] The pièce de resistance, the 8 House, is the final creature to emerge from the research lab. 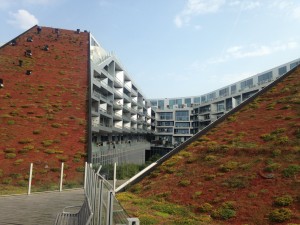 The 8 can’t be perceived from a northerly ground level approach so the initial (wind-assisted) sensation is one of disappointment at a seemingly ordinary grey-clad object. The quest for that important coffee forces the journey through the building, a more rewarding experience, revealing the ski-slope expanses of sedum roof which cover the now visible 8. Living there is light-filled, according to the French architect resident I met (not the only architect in the building). She was happy to overlook the strange urban planning in favour of a perfect situation between city and countryside, as well as the common hall facility (rent-free). I think she said it was cheap, too – such a dominant factor in today’s urban living choices. How much do these fruity architectural buildings cost? The cost/value relationship must be very sub-optimal, no matter how innovative or invigorating these ‘branded’ buildings are. 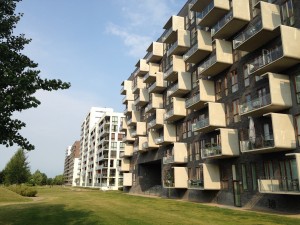 The sadness, though, is that the cheaper and more rational buildings at Ørestad are not nearly high enough quality – the recession seems to have impoverished them. A swathe of this somewhat less successful housing occupies an adjacent strip of land, characterised by 12 storey blocks facing on to a huge park with a university campus vibe. You could equally have had 3-4 storey buildings on streets and achieved the same density, but then the park would have been missing. You pays your money and takes your choice – there’s no right or wrong to this in my view. But who pays for the upkeep of the park? This would be a vexed question in the UK, but one imagines that in Denmark, it is simply a cost borne by the city.

PS: Does anyone want to be in places like the Bella Center? Do the masters of the universe at their security-bound political summits relish the oceans of car park, the dumb glass cubes, the phallic hotels, the ‘traditional’ golf venue adjacent? Don’t they too long for a more intimate set of spaces to work and play in, with hidden corners and basement bars…?