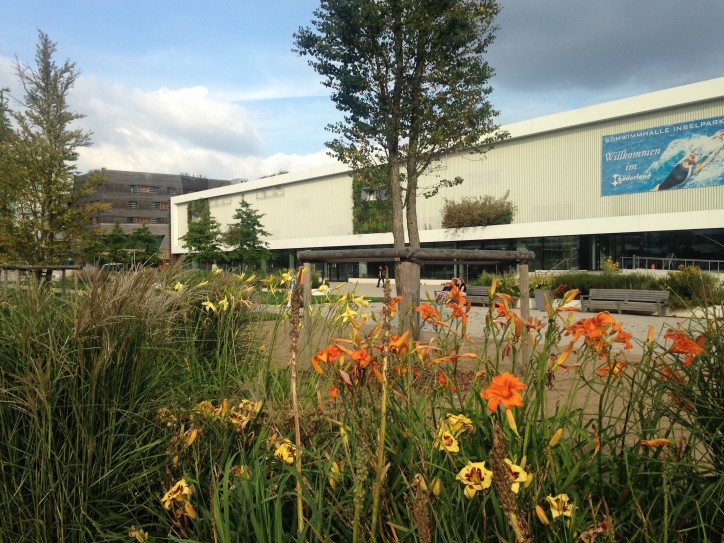 Resident Feedback: ‘I’m still not sure I would bring up my children here…’

Wilhelmsburg is rather like Thamesmead in London. Property values are very low. The population is largely low income. Both places are detached from their host cities and even local neighbours, feeling like a world of their own: diverse communities have developed non-mainstream ways of living there. Both have troubled concrete buildings and oversized transport arteries which cut up the area. And finally, both places have a negative popular image – ‘you don’t want to go/live there’ etc. Wilhelmsburg is the opposite of HafenCity – the other side (literally and metaphorically) of Hamburg.

Hamburg is growing at 10,000 people per year, London at 100,000 (equivalent to about 0.5-1% annual growth for each) and they are both looking to their outer districts to take the strain. Crossrail arriving at Thamesmead has caused a flurry of investor activity and the key landowner Peabody (alongside the boroughs of Greenwich and Bexley) now has the challenge of how to attract long-term investment partners and tackle the future of the whole 1200 hectare peninsula. Wilhelmsburg’s regeneration was started with a citizen-led appeal to the state for inward investment in 2001, which morphed into an IBA in 2006 (a German acronym for International Building Exhibition), a vehicle for delivering housing innovation since 1901. The Hamburg IBA seven year project recently completed, having attracted investment of about £750m (about a third of which was public sector money), built 1200 new homes, refurbished 500 more and built schools and other social infrastructure as well as executing open space projects. 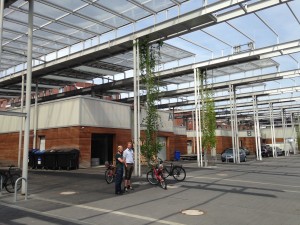 The challenge was immense: how to get people to ‘Leap Across the Elbe’ (it’s a long way, in people’s hearts) and to see the 3500 hectares of the island of Wilhelmsburg (Hamburg itself is only 2000 hectares) as a destination rather than a threat. An International Garden Show in 2013 (IGS) was an important part of getting new people over the Elbe, and it left a legacy of a now successful park and sports centre at the heart of the island. There has been some inevitable and understandable challenge to the whole IBA project from various sectors of the community, perceiving it to represent a top down and institutional model of regeneration. But as the project progressed through its seven years, local community development, participation and educational work has grown in strength. A small business park was occupied enthusiastically by local enterprises, capturing local business activity already emerging and allowing it to flourish.

The immense model in the visitor centre and the subsequent long cycle trip through the island revealed how £750m can disappear very easily. My view (see caveat below) is that the investment has been too thinly spread and that a more concentrated endeavour might have had more impact. There are definite parallels with Utrecht’s Leidsche Rijn (which has been going for somewhat longer) where the sheer amount of activity and new homes has been transformative. The IBA demonstration homes form a slightly self-conscious ‘business park’ of pavilions, eager to show their green credentials but not looking like an authentic physical neighbourhood. 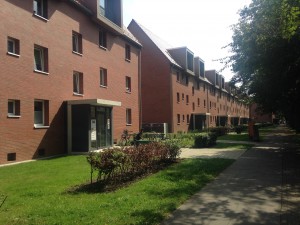 Having said all that, the IBA has plans for 4000 more homes (and a lot else besides) on the island, building on the lessons learnt from those demo projects, so maybe it just needs time. One attractor is a relatively new boat service (included on your travelcard) from the island into the mainland part of Hamburg, which takes only 15 minutes. It is an intense industrial journey past working docks, containers, cranes – something we simply do not see in London. It feels good to experience a connection with that manufacturing and distribution infrastructure, which still provides a lot of local employment, though clearly not comparable to its heyday.

The complexity and multiple narratives of Wilhelmsburg mean that a day’s visit here does not allow sophisticated analysis so I apologise to the excellent staff of the now commercial venture of IBA Hamburg, which is continuing to invest in the island, if I have over-simplified.