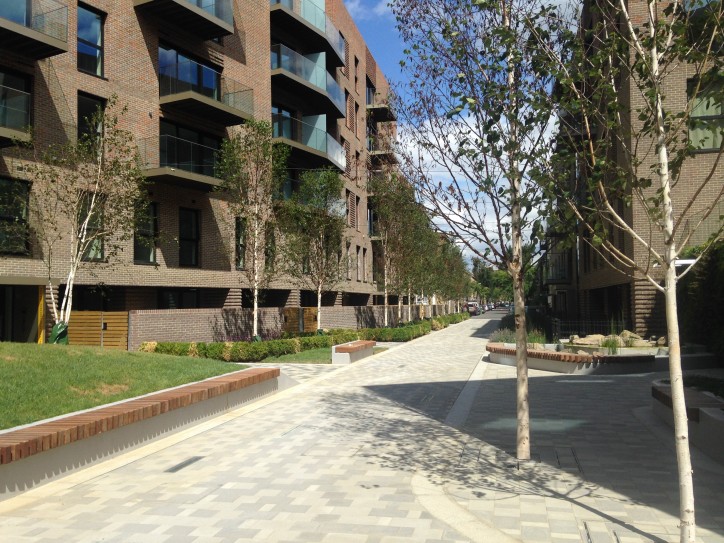 Resident feedback: ‘I love the openness – and walking my son around’ (Middle aged man with small child in buggy)

I’ve been heard to whinge recently that were a continental European visitor to seek interesting new housing schemes in London, I’d be hard pushed to think of somewhere to send them. I will also admit to not having been convinced when I saw the layout of Trafalgar Place, with what appeared on plan to be unconnected blocks and largely public landscape flowing between. 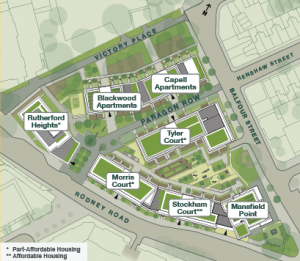 But I will have to revise my thoughts on both. Trafalgar Place feels like a very successful piece of city already. Keeping the existing trees (a contested issue at planning) was a master-stroke: they instantly create a mature landscape in which to set the crisp new buildings and also serve to crank the block layout in a characterful way. Numerous generosities of spirit pervade the landscape design, including bespoke benches, already mature hedges, green walls and even a water feature. The residents share a podium garden above a well-disguised car park. The soft landscape is already being well looked after (so important) but needed a little more litter management. It did make me wonder who is charged with the grounds maintenance, and who is paying for it: service charging for the management of extensive planting can be an issue for lower income residents. Garden walls which border streets can be ugly and alienating, but they were built at the perfect height (about 1500mm) and enlivened with incident. Buffer zones to the main street were resplendent with lush planting by every front door. The resident I met was clearly enchanted by the landscape and the feeling of space, which was his first instinct when asked what his favourite thing about his home/environment was. It’s clearly a dense scheme, but that’s not how it felt to him. 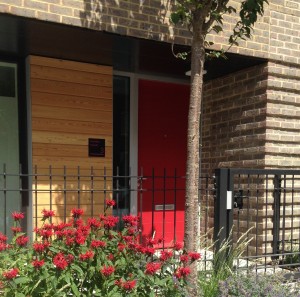 The fabric of the building is simple but with enough detail to delight the passer-by. Brick colour shifts are playful, including turning corners in a ‘long and short work’ style. Balconies are huge (a great outcome from the London Housing Design Guide) and tightly detailed, avoiding cheap patch fittings to the glass balustrades.

Difficulties for me include ubiquitous CCTV and some downpipes (I think) which seem like an afterthought on elevation. When you hear visitors on their mobile saying ‘I think we’re outside your flat’, (they weren’t), it usually means that the naming and numbering system (and the signage) has gone slightly awry. And always a shame to see an unlet shop in such a promising place. I’m sure there’s someone out there happy to transform and enliven that space, even if only for the short term…

Lastly, the saga of the amount and type of affordable housing in this development (25%) and the Heygate regeneration in general would need a lot more space than this blog allows, but you can make a start here and here. It’s fair to say that ‘viability assessments’ – the financial modelling technique for establishing the amount of affordable homes on any particular development – are flawed, and a change is needed.