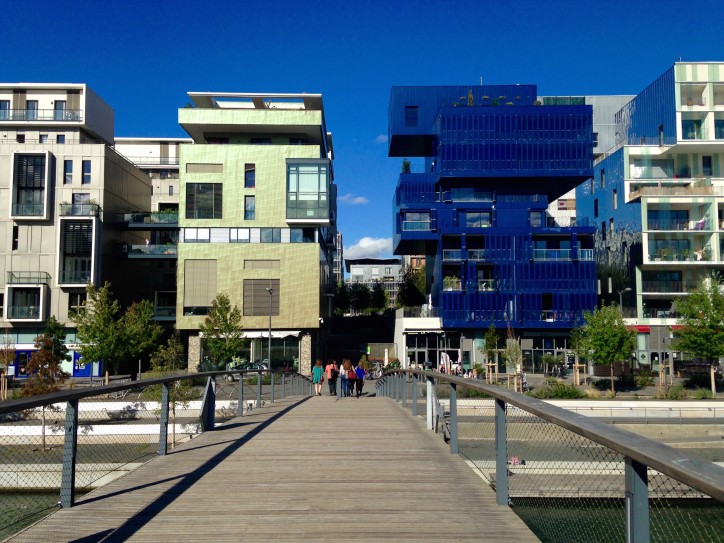 Resident feedback: 41% would live in a new high rise 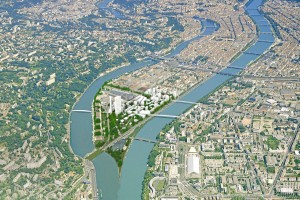 ‘Shed heritage’, ‘new sheds’ (aka shopping centres) and tall residential buildings are all seemingly essential ingredients of city centre regeneration, even in historic Lyon, which is grappling with them at Confluence. Lyon is 12 years through a 25-year refashioning of the 150 hectare southern tip of its central island, which was formerly home to a dock, post office sorting centre, vast wholesale market halls, abattoirs and prisons. 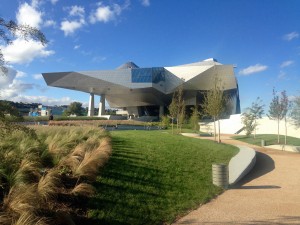 (In fact, the parallels with Nine Elms in London are striking.) This halfway staging post in the redevelopment allows some reflection for the city and its visitors, with 2,000 homes complete and many other business, arts and retail uses now off the ground there. Coop Himmelb(l)au’s computer-generated angular museum, allegedly seven years delayed and three times over budget, is not my kind of building: but it does a ‘destination’ job at the tip where the rivers meet. 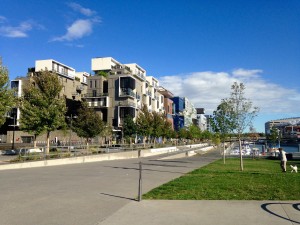 A motorway, train station and railway tracks make for a sliced up terrain at Confluence, which also had an image problem to overcome due to its historically ‘dirty’ functionality. The mixed use gambit was clearly the right one for such a central location, and some clever repurposing (prisons to university buildings, dock warehouses to arts centres) already feels authentic and not too gimmicky. This is ‘shed heritage’ at its best: but what of ‘new sheds’? On a sunny day I wondered where all the people were as I sat in a slightly down-at-heel café on the wide stretch of new waterside created as part of the masterplan. They were in the mall of course, in air-conditioned, sheltered comfort, with smells, music and reverberant noise providing background accompaniment. 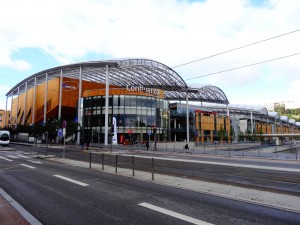 Is the best we can do in the 21st century to knock down solid and characterful concrete market buildings and erect flimsy, but hulking, shopping malls? The one at Confluence is particularly criminal, in that it presents ugly timber-clad blank walls and parking grilles to its neighbouring streets. An indoor street simply supersedes the outdoor ones, crippling outdoor public life (and the cafes by the look of it): but the mall is now a destination and more people than ever are visiting Confluence pulled in by its magnetic draw. Better minds and pens than mine have written about this phenomenon and I am more than aware that there is some snobbery associated with this issue, but leaving these aside, I am still not convinced that malls physically coalesce well enough with their neighbours to make successful city centre places. Investor ease of management seems to be the dominant driver. 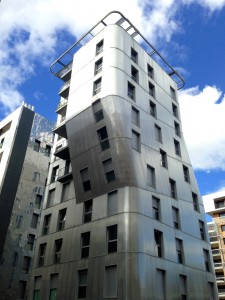 Tagging along at the back of a group visit allowed me to experience the older French architectural community in full voice, as we all stood round the visitor centre model to debate the next, denser, phase. My French was just about adequate to pick up a lively discussion about tower blocks, railed against by some (‘let’s not repeat the banlieues’) but accepted by others (‘there will be wonderful views’). Two fairly recent and very ordinary commercial tower blocks have interrupted Lyon’s medium rise skyline so some skepticism is understandable, and Herzog and De Meuron’s proposed twin towers in Phase 2 don’t sit that comfortably on the model. Research on display in the visitor centre demonstrated that 41% of people questioned would be happy to live in a new build tall building, 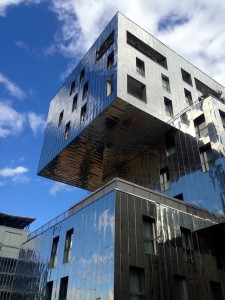 the reasons being light, a modern home, and the view – those in their 20s were the most enthusiastic at 50%. Unsurprisingly, this is a higher proportion than in UK surveys, where people routinely return a verdict of ‘no thanks’ when asked this question (about 25% say yes), consistently opting for houses as the default. Towers still have a stigma amongst certain cohorts, but perhaps this could and should be overcome; as is often pointed out, the rich and Eastern cultures pay a premium for homes in high rise, and there are many successful examples. Older people have been reported to enjoy high quality, well-maintained high rise due to the view, light and in particular good single-point security. Maybe it’s just a case of building some really good ones, for people other than Chinese investors, to prove the point. 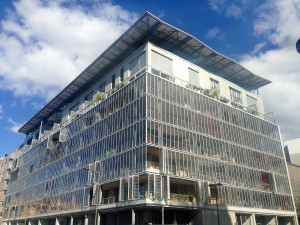 Green points: parking spaces are shared between commercial and resi, and there are electric cars for rent; there are now some ‘plus energy’ buildings open at Confluence (net contributors to the grid); and a 10 year refurb scheme will cut existing 1930s housing energy consumption to a quarter of its current use.

I was surprised to learn that the development model is very much along Swedish lines: the (public) land is masterplanned and fully remediated by the city; substantial public investment is made; the price for the land is fixed when the masterplan has ‘landed’ and plots are then sold to developers on the basis of bid quality only. Homes (50% market, 25% intermediate and 25% social rent) are market priced at about £320 per square foot (very cheap in London terms). And there the parallels with Nine Elms end.

PS: Lyon’s city bikes are pretty rickety but I forgive them at E1.50 per day.