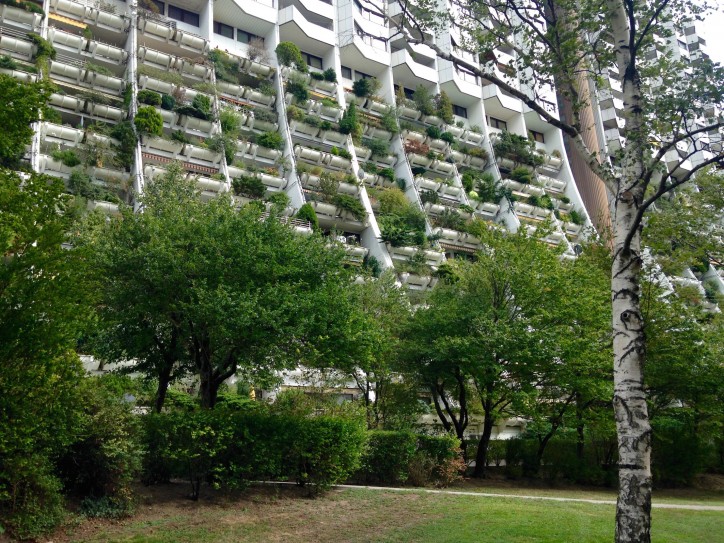 Resident feedback: (Alt Erlaa): much happier than the media wants them to be… 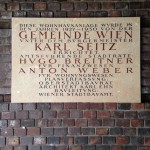 Vienna has a long and proud history of state-built housing, openly declared on copious city signage stating the name, year and architect for each block, however modest or grandiose. Numerous factors in London have combined to ensure that its council housing stock, far from being celebrated, is stigmatised and unloved. There are heated campaigns going on currently, from both the architectural community and local residents, to save some of the better examples. P 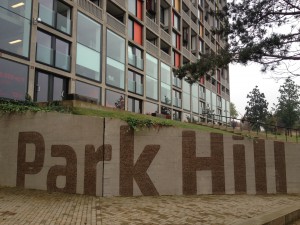 erhaps it is a shame that the hugely generous and civic-minded social housebuilding boom of 1960s Britain coincided with the exposed concrete, off-ground walkways era rather than Vienna’s 20s-30s romantic sensibility. It’s harder to make London’s average citizen fall in love with or cherish our social housing stock, determinedly dour as it can be, and it’s surely up to entrepreneurial architects and owners to show its potential. It can be done: see Bijlmermeer and Park Hill to be inspired. 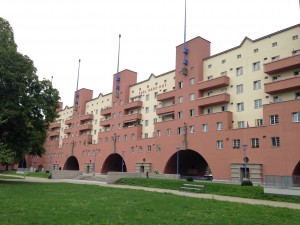 Vienna has about 900,000 homes – about a quarter that of London – but 46% of these are either state built and run, or state subsidised, compared to London’s 24%. £400m is used to gap fund new housing annually in the city, which is the same figure as London, and thus represents four times as much funding per capita. Most people rent their home in Vienna. Why buy when you can rent a beautifully built and maintained city home, especially when 50% of people are eligible for state housing? Mixed-use has been woven in to schemes in this city since the early housing days: Vienna’s first libraries were part of the housing system, and kindergartens, day care, dental clinics and courtyard parks were prioritised. This makes the idea of housing and the city indissoluble – homes are just one part of the social infrastructure necessary for a good life. It is clear that affordable, attractive, state-delivered housing still resonates today and that the Viennese are prepared to pay for it. 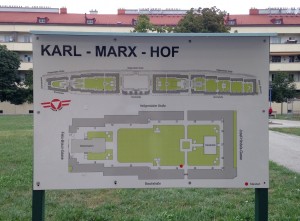 Most Viennese social housing is contained in ordinary (but carefully crafted) rendered street blocks in courtyard formation, but there are some well-known and breathtaking examples of the state showing its authority and might. Karl Marx Hof is a 1920s mega-block which extends for over a kilometre and 11 hectares in the north of the city near the Danube. It takes the idea of a courtyard to its limits, stretching 1400 homes around vast tracts of grass (too big to manage well I suggest) as well as wrapping in the social facilities (laundries, wash houses, kindergartens) inherent in Red Vienna’s pioneering programme. Karl Marx Hof’s architecture simultaneously broadcasts that man is small and humble beneath its 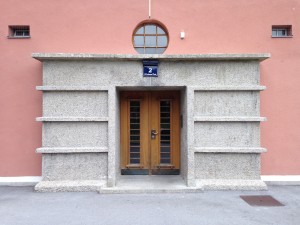 statues, flagpoles and grand order archways, but that man is also cared for with bespoke door handles, joyful staircase details and celebrated doorway surrounds. I calculate that its density is about 125 homes per hectare, perhaps low given the seeming scale of the place, but density can deceive. It certainly fools you at Alt Erlaa, the jaw-dropping 1970s estate in the south west of the city, which I think is at roughly the same density of 133 homes per hectare. If Karl Marx Hof found the boundary of courtyard-form housing, 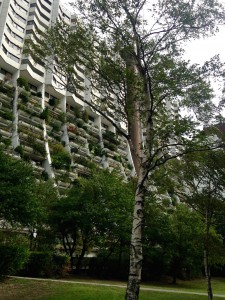 Alt Erlaa takes the concept of megastructure to its limit, for housing at least. Three 23-27 storey concave blocks containing nearly 3200 rented flats dominate not only their own site, but the landscape well beyond. The British sensibility immediately recoils at this kind of structure, and indeed the Austrian media has repeatedly tried to damage Alt Erlaa’s reputation; but resident satisfaction surveys consistently return happy feedback. The lower flats benefit from 6 x 1 metre planting troughs which are beyond successful: the architect can only have dreamt that his curving green wall would be so vividly realised (the tenant manual goes into great detail about which plants are permitted!) There is not space here to detail the extraordinary mix of uses captured within this ‘town’ and I must recommend that you get Google to translate the estate homepage. Stand-outs for me in this Gesamtkunstwerk include 7 rooftop pools 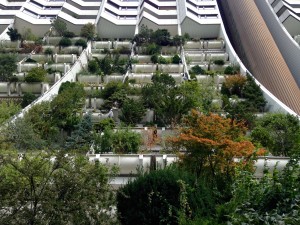 (apparently the key social condenser), 20 saunas, 32 clubrooms (and as many clubs) and 17 medics on site. Walking through it, I wondered whether in spite of all of this social infrastructure, people might either feel isolated, or conversely, whether their whole lives would become wrapped up in this place and they’d never venture out: surveys have shown that residents leave this estate far less than the average person leaves their block. But perhaps it’s just horses for courses: if this is what you like, then you’ll like this kind of thing. Let’s not, in London, dismiss ideas like these two for the 25% who might want it.

PS: Austrian taxes dedicated to the housing programme have now had their use widened so there is a danger that Vienna will choose to redirect its funds away from new homes; but housing features strongly on the ubiquitous posters for this October’s city elections, so perhaps Red Vienna will hold out…