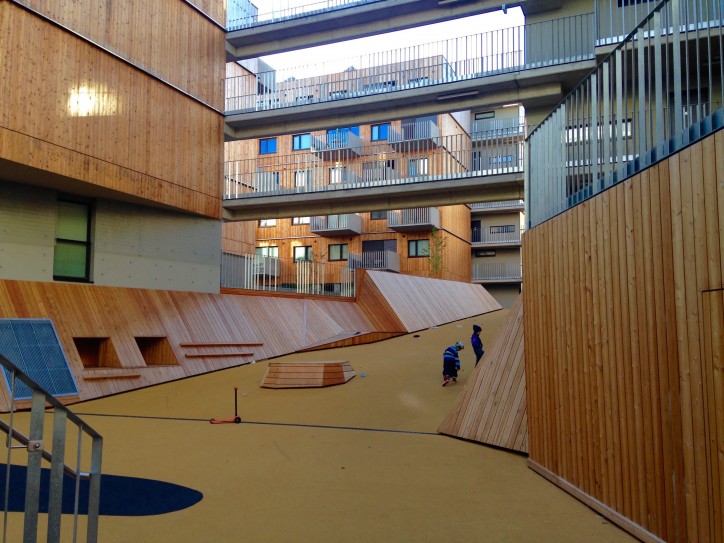 Resident feedback: (Aspern): ‘It’s Vienna, but not’. (Nordbahnhof): ‘the children growing up here, the hope is that they will continue the project’ 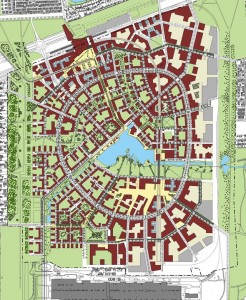 At what density should new settlements be built in the outer fringes of big cities? This is a key question facing those regenerating Outer London. Surely the point of moving to zones 4-6 in London is a lower rise environment offering big private gardens – a place to get away from it all and for children to flourish? The pivotal economic issue though is the public investment in new rail infrastructure: greater densities are needed to justify the initial payout, and then to run a new section. (I am not clear, for instance, how ‘Metroland’ worked in London in the 30s – someone may wish to comment). Vienna’s U2 line has been extended rapidly over the last 10 years, culminating at its northern end in Aspern Seestadt, a new 240 hectare settlement of 20,000 people on a former airfield about 25 minutes from the city centre by underground. Aspern’s development has been rapid: a competition held in 2005 resulted in the appointment of Swede Johannes Tovatt as masterplanner, the U2 station opened in 2013, housebuilding started the same year, and people started moving in 18 months later. During 2013-16, 2600 homes (plus other uses) will have been built (most are already complete now) which is an incredible delivery rate of about 900 homes per year. Businesses (including small start ups and research institutes) have also moved in. (At the peak of delivery, 14,000 people came to watch 45 cranes doing a dance to a specially composed piece of music…)

Arriving at Aspern by bike is a shock. The transition from rather pretty low rise suburbia to the 100 homes per hectare (my estimate) new metropolis is stark, and strangely emphasised rather than tempered by the green finger which was placed between them to assuage neighbours’ anxiety about being swallowed into the new urban area. (Aspern is not the ‘urban extension’ beloved of Utrecht or Hamburg: it is a discrete tabula rasa with no funky former airfield structures, no memories of the former use or layout, very few connections to the adjacent neighbourhoods and not really cyclable from the city centre.) The concept behind Aspern is ‘The Full Life’, meaning city and country, living and working, suburban and urban. The resident I met had moved from the countryside 90 minutes fr 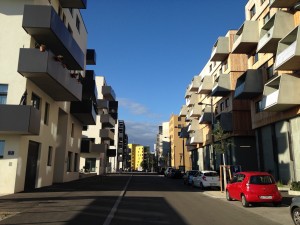 om the city to be in Aspern, the best compromise in terms of commute time and her children’s welfare. ‘It’s Vienna, but not’, she said, and she was totally unfazed by the very modern and relatively high density scene. For children, Aspern feels like a paradise: traffic is calmed, most parking is below ground, and there are numerous public and semi-private play areas, some of which are simply part of the general flow of the landscape rather than formal. The best one I saw was a sculpted timber access way to a courtyard with a small climbing wall – that would have been my choice as a five year old! Families dominate the scene here at the moment but clearly this will change over time: it will be interesting to see how older people fare here and whether Aspern manages to attract other demographics. 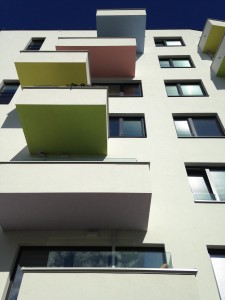 The predominantly six storey courtyard environment with cranked, varied-width streets and informal open spaces bears the hallmark of its Swedish designer, a controversial choice by the city (whose own architects were by all accounts put out by the appointment). The architectural realisation of this plan is competent and nicely built, with some unexpected events, colours and materials livening up what for me is a slightly monotonous scene in terms of building heights and elevational treatments. Four co-ops were involved in early phases, with one of their courtyards being created using five irregular pavilions nestling together very closely, accessed via some precipitous and enticing ‘alluvial fan’ staircases. 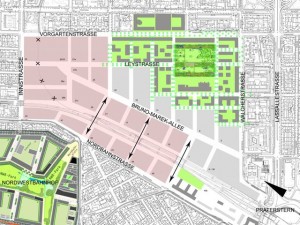 The interesting comparison in Vienna is to their Nordbahnhof district, a site created by the unification of Vienna’s railway stations and closure (and sadly, demolition) of all of its 19th century termini. At 75 hectares, Nordbahnhof is only a third of the area of Aspern, but planning on the same amount of homes – so isn’t that higher density? Not really: the homes are spaced in a similar way, it’s just that Aspern includes far more open space between neighbourhoods and a lot more non-residential use. Nordbahnhof benefits from an early huge park which seems underpopulated, though more housing is yet to come, a lot of it based on themes such as cycling (specially designed homes for easy bike storage) and older age. I met Vera and Frider here, respectively tending an allotment and running a community café, with food growing an integral and visible part of Nordbahnhof’s offer to its multiplicity of residents. 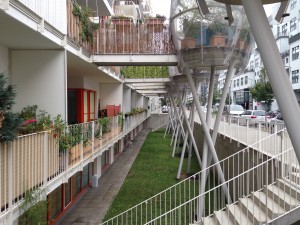 (Even toads have moved in: a rare species is causing scientists to be frequent visitors to the area.) The striking architectural events in this district include the occasional use of flying balconies and conservatories which brought some humour to the somewhat straight-laced streetscene. We also picked out as an architectural nugget, unprompted, the cluster of pavilions amongst which was a Sergison Bates building. Frider was convinced that co-housing and collective living would rise in the UK as young people rejected the stranglehold of capitalism: I look forward to re-contacting him in 20 years to see if he called it right.

PS: Boris Johnson explored what could be done with Heathrow’s site were the airport to move to the estuary, and discovered that 90,000 homes could be built there – I wonder if that interesting prospect might ever come to pass? My (somewhat uninformed) view is that it would be a very good thing, albeit that a major new employer would need to be found for the area!