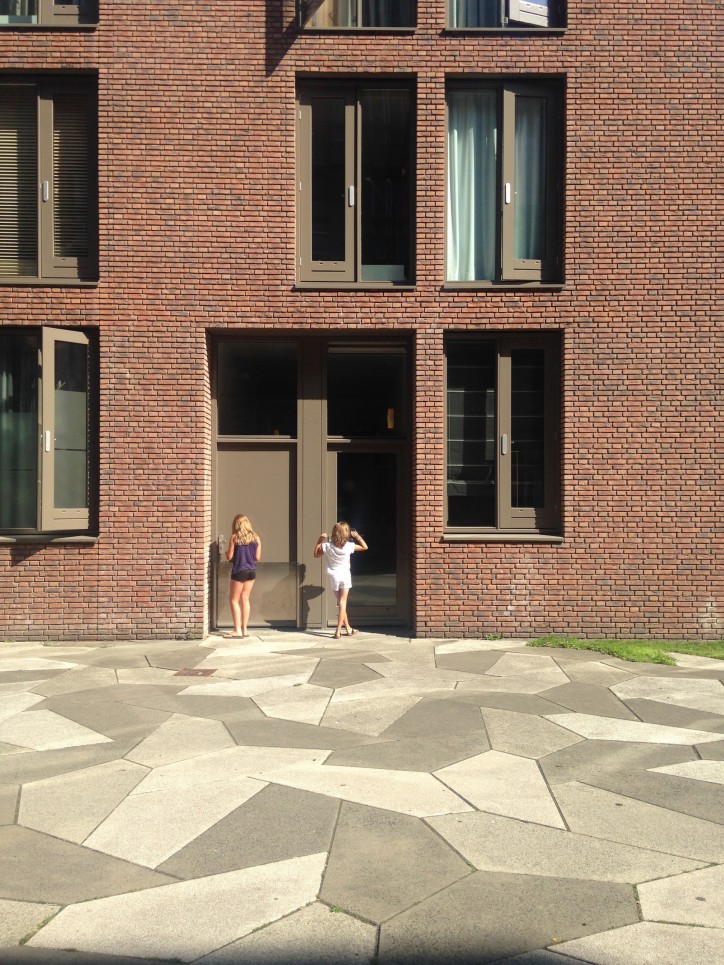 Resident feedback: ‘The English would not like living here!‘ But the Spanish would!’ 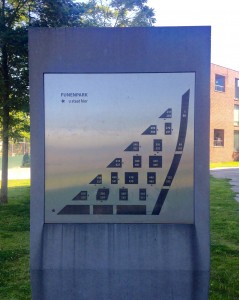 If yesterday’s gates had me pondering on cultural differences, Funenpark is the epitome of ‘public living’ which I believe is simply not translatable to the UK scene. As a child I was taken to Singleton Open Air Museum, a park in which various mediaeval buildings had been recreated so that listless schoolchildren could poke their noses into each one and wonder about the exotic (and freezing cold) lives of their forbears. Funenpark is the 21st century equivalent, except that it is a real community, living a zoo-like life in central Amsterdam.

16 blocks of flats (and a few sculptures) are set in a very simple landscape of grass and tessellating ‘crazy’ paving in various shades of grey. The density is surprisingly low at just under 100 dwellings per hectare (565 homes on 6 ha). 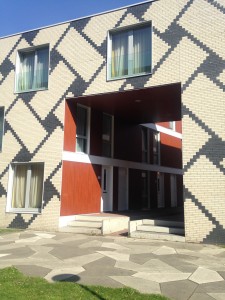 Some of the object buildings worked better for me than others (my favourite is Dick van Gameren’s), but the overall composition, the retention of mature trees, informal routes through and vehicle-free landscape, hangs together. A detail: the public benches were probably 650mm high, which not only allowed older people to perch easily, but also made a good table or barbecue stand. Peace reigned, as the railway noise has been shielded using a Byker-like perforated barrier block; but the Funenpark block is less successful than its neighbouring pavilions, rather heavy in appearance and cutting out sun for a large part of the day.

The older resident I met there gleefully told me about an English ex-pat who had brusquely turfed some strangers off her Amsterdam front bench. When I explained the English psyche, one based on ‘good fences make good neighbours’, the penny dropped. ‘The English would not like living here!’ she said: ‘But the Spanish would!’ Is there a way in which we Brits separate our communal and domestic lives and wherein lies our success? We are good at parks. And terraced housing. But not together thank you.