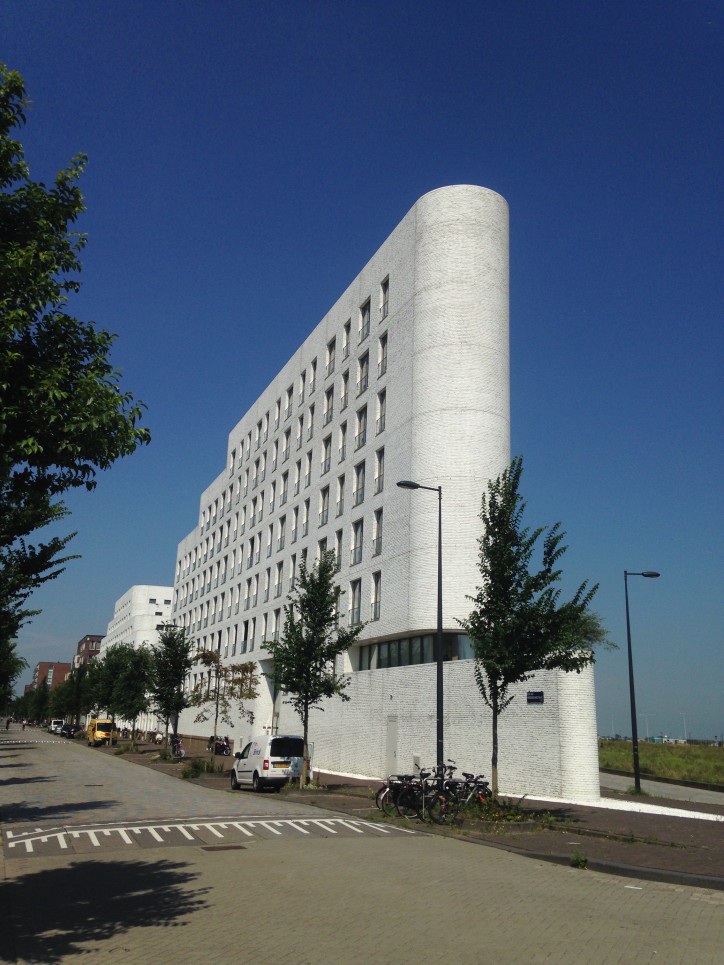 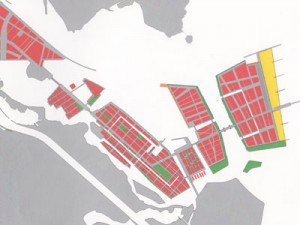 Another day, another example of the Dutch working at a large scale, building 18,000 homes (and 130,000 sq m of other uses) on 450 hectares of reclaimed land close to Amsterdam’s city centre. Half is now built, and Ijburg is home to 21,000 people as well as businesses and shops – some of them floating! Not that the development was without controversy: the local populace voted it down due to concerns about wildlife and the environment generally, but were overturned by the city who pressed on and completed the first homes in 2002, with many more coming on stream since. A combination of the recent downturn and further environmental concerns have prevented phase 2 from progressing as planned – the two right hand islands do not yet exist. 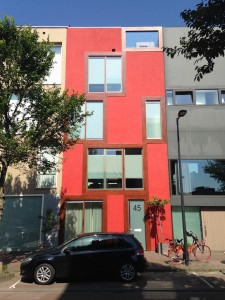 Two sets of buildings stood out for me. Self-build housing en masse can be try-hard, incoherent and hokey. But on the first Ijburg island of Steigereiland, the ensemble just about holds together. The street pattern is simple and legible: there are some flats and some townhouses, and the lucky residents who live on the water’s edge enjoy what can only be considered a semi-private beach without comparison in most capital cities. I found myself laughing as I cycled the streets: playfulness combines with calm rigour to form streetscapes which give little thrills round each corner. The other thrill was the Witte Kaap (White Cape), a totally unexpected 2-7 storey building at the far reaches of the islands, looking like it has sailed in from Scandinavia and decided to stay in Amsterdam (image at the top). Its shape reminds me of Kingsley Court in London. The architects (Claus en Kaan Architecten) have unashamedly taken their cue from the maritime feel of art deco buildings, and then applied a modern patina: I applaud them for it! 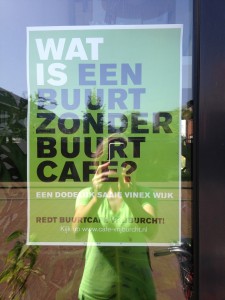 Asking around about both Leidsche Rijn and Ijburg, I realise that the early pioneers suffer from other people’s urban snobbery – ‘there’s nothing to do there’. The homes therefore tend to be bigger and fancier to ensure that new purchasers are attracted. Making vital shops and cafes work in a brand new area can be a challenge and nearly always needs a financial leg-up in the early years. There is currently a campaign to save the neighbourhood cafe, which seems to have failed, or been ‘priced out’. Has subsidy for this commercial unit been withdrawn? As the posters say: ‘What is a neighbourhood without a neighbourhood cafe? A deadly boring suburb’.

In a later post, I’m going to be throwing out a challenge to you all. And I need you to participate please! Five days in Holland (on top of a couple of trips here last year) have given me a new perspective on the quality of UK new build housing. You have been warned…