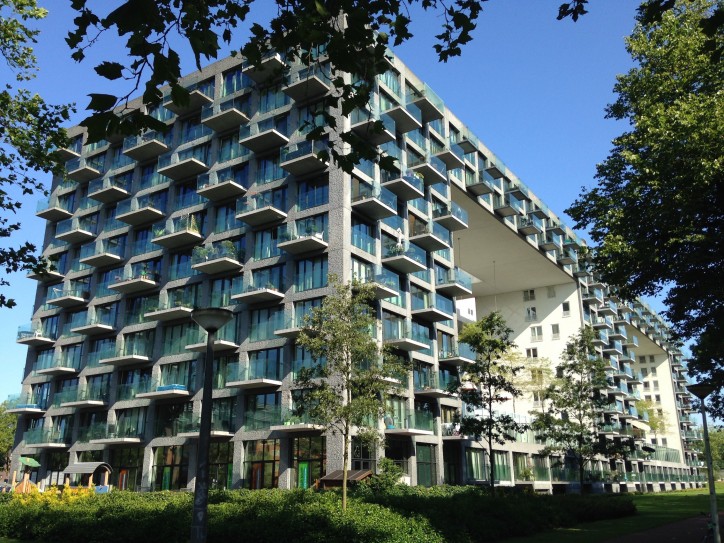 Resident feedback: ‘I thought it looked like a jail! But actually the flat is great and the view of the park is lovely.’

‘That ain’t a buildin’ – that’s fuckin’ architecture.’ These words, allegedly spoken by a contractor for Richard Rogers’ Lloyds Building on first seeing the drawings of that building, came to mind when my bike journey reached MvRdV’s Parkrand in the Nieuw-West area of Amsterdam. And it made me wonder: should housing ever really try to be ‘fuckin’ architecture’ anyway? And if not, why not? 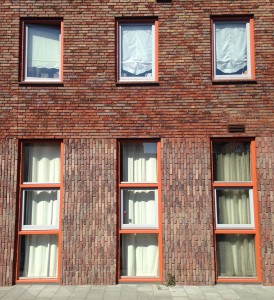 My cycle through the west of Amsterdam took me past numerous examples of new low to mid rise housing (with occasional 12-15 storey punctuations), very simply built, largely from brick. Character was added with brightly coloured window frames, angled balconies, brick patterning (using richly textured bricks) and a generous ground floor height. These ‘background’ buildings were set within the most verdant and peaceful landscape of canals and broad verges lush with grasses and reeds. Cars were tucked out of sight. These are the so-called ‘Western Garden Cities’ of Amsterdam. So Parkrand was a shock – a pleasant one in the main, though I may need to think about this one longer than a blogging framework allows. Is it a sculpture, a giant toy, a megastructure, a window frame, a carved out hunk of feta cheese? It’s all of the above, but with housing in it. 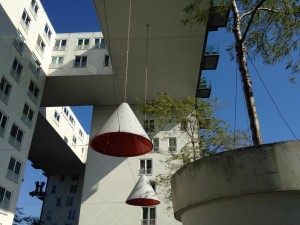 Laura, who kindly showed me in, said her first impression was of a prison – no way am I living here, she thought. But it’s grown on her, though she would like far more greenery within the building’s ‘envelope’ and not just out of her window (which she loves). The first floor amenity space (I can’t call it a garden) felt like an outdoor room in an art gallery: stark, intimidating, arresting but not somewhere to linger perhaps. Oversized flower pots and lampshades playfully signify homeliness, and undersized elephants provide some actual play, though the gag must surely wear off in time. These enormous covered outdoor spaces can get noisy according to Laura, though there is a set of 14 ‘House Rules’ which is pinned up in the lobby and seems to be policed. 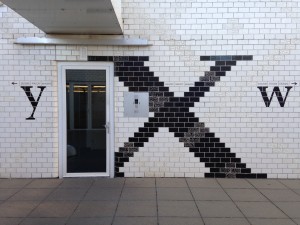 Very unsuccessful (and surely not intended) is the car and bike parking on the west side of the building, which is a sprawling, uncontrolled mess that ruins the entrance sequence. But the key question is: are the residents living in an architectural conceit, or a community? I wish I could have spoken to a few more to know. I happened to pass MvRdV’s older people’s housing scheme (Oklahoma) nearby, which is still looking good after many years.

Thanks to Laura for chatting and letting me up to the important first floor open space.