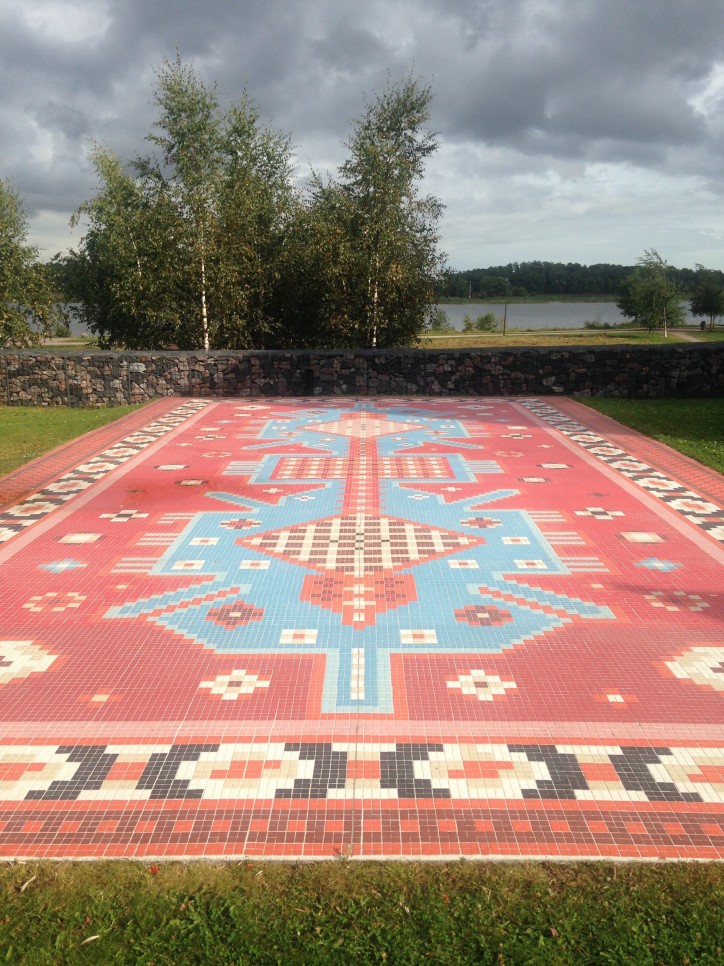 Resident feedback: (Jätkäsaari) ‘You can’t tell whether it will be a nice place. They should have finished the park first’. 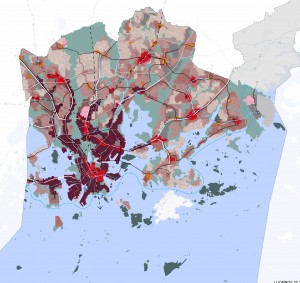 Helsinki has a ‘compact city’ policy now (more is coming in the dark red areas), having previously suburbanised through sprawling settlements after WWII. It has already completed thousands of homes at its Western Harbour and in the Arabia area, and now the city has committed to build 5,000 more homes every year until 2030, with 20% at subsidised rents, 40% in various intermediate tenures and finally 40% at market price (half for sale). (London’s policy includes far less affordable housing, though its research shows that it is sorely needed). New build densities are relatively high: I have spent the days walking through 150-200 homes per hectare, 6-8 storey environments (rising to 12 storeys) and towers are coming soon. 70% of what is built will be on city land – again, they have substantial control over policy, masterplanning and developer choice. The tram has gone in early (sometimes skimming its lonely path through rubble); but what are these new environments like? 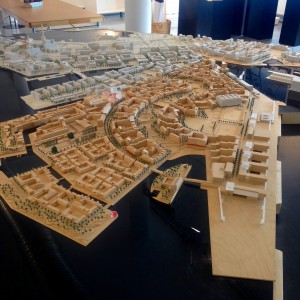 Helsinki’s centre is blessed with a unique architectural fabric, dominated by the visual languages of 1900-1940 including bold and beautiful oriel windows, curves, solidity, craft and decoration everywhere you turn. The new builds, however, are of very variable quality and seem to have suffered either from a zest for speed and volume, or a loss of craftsman-like skills from its designers or builders. The 1990s section of the West Harbour (Ruoholahti) is an essay in white and grey restraint, carefully thought through balconies and winter gardens (essential here) with trees and landscape softening the whole effect. (Incidentally, Secured By Design rules would never allow such wonderful planting now – this needs to be reviewed in my opinion). Details are finely wrought and include tiled ground floor walls, built in flower boxes, apple trees, shoe cleaners at the common door (!) and translucent balcony balustrades. Some might find the uniformity oppressive: but the later phase at Jätkäsaari shows what goes wrong when manufactured variety is clumsily introduced. The courtyards are the most brutal and badly designed I have seen; th 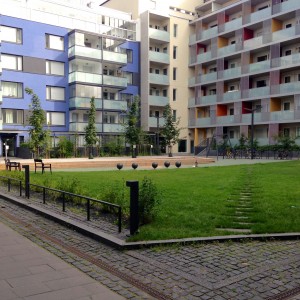 e fire and rubbish services have dominated the discussions and the designers have picked randomly from a cheap sample catalogue of floor finishes. Soft landscape is missing from both inner courtyards (once again totally open to the public) and from the public realm. (Are 8 storey perimeter blocks with cavernous courtyards the right urban typology for this freezing city anyway?) Cars are tucked below, but the car park vents are ugly and spoil the spaces. The fact that there is a sauna and common room in every block (how civilised) does not excuse the under-investment. Some lovely bits of architectural relief come in two courtyards, (by Stefan Ahlman and Huttunen Lipasti Pakkenen), but in general the quality of both design and build is really disappointing. I wanted to shout ‘stop’ to the contractors currently rushing through the next phase 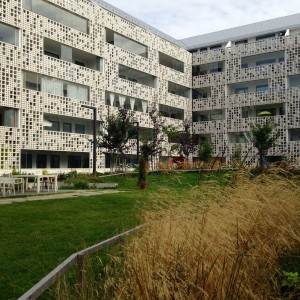 . I do not apologise for returning often to this theme, because it is so crucial for London as it considers building 50,000 homes per year. Engineers and contractors would not consider installing city drains, railways or motorways with a ‘that’ll do for now’ attitude: there is (usually) a commitment with this heavy public infrastructure to investing in long-lasting materials and workmanship (and, credit to them, visual excitement in the case of our Victorian forbears). Housing needs the same treatment. I am frankly amazed that mortgage lenders and PRS (private rental sector) investors are prepared to fund some of the buildings which are currently being built both here in Helsinki and in London. Sure: they meet Building Regulations and sometimes NHBC standards but these so-called safeguards are simply too weak to call upon for residents and the consumer ends up paying. So is there any good new stuff in Finland’s wonderful capital? 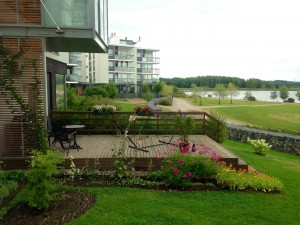 George Osborne turned up in Helsinki the same day I did, but something much more important was going on at Arabia, a recently completed 3000 home and commercial area, previously a porcelain manufacturing plant, to the north east of the city centre: the city magnates were celebrating its completion after 15 years with a party. Not all of Arabia is great, but enough of it is to make the area feel like an emerging place which someone has cared about in both design and execution. A clever masterplan combines higher density and commercial, retail and university uses towards the main road, leaving open sided courtyards and pavilion buildings to feel their way down towards the peaceful and beautiful waterfront (part of the excellent emerging continuous wide, cyclable route throughout Helsinki’s coastline). 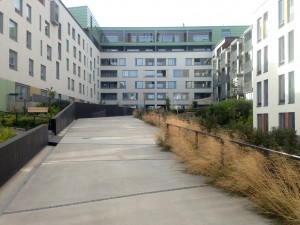 Older people and students have specialist accommodation, grouped together around their own courtyard in this case, which I really liked. They’ve also used their valuable ‘percent for art’: a walking map is provided of 20 outdoor pieces (some of which were memorable) which are linked either to the landscape or buildings. I thought this might be gimmicky, but it was a nice lens through which to experience the ‘estate’ as a visitor, and referred back to the area’s ceramic past. Surface parking spoils the overall environment a bit, but if that means more money has been spent on the built fabric, I’ll take that compromise.

And yes, we’re on a waterfront again – the Finns have made a very big play of this national obsession in Helsinki, including urban saunas, kayaking, fishing and new floating homes coming. I think the proposed pool and dedicated cycle path on the Thames would be hugely beneficial, even if the Thames has a limited potential compared to its northern cousins. In an ideal world, we’d have ships sailing in, cranes, containers, fish markets… but I fantasise. (How about some saunas?)

PS: Tomorrow a piece on how Helsinki consults/engages. And the ‘Wild East’ nature of its regen sites…