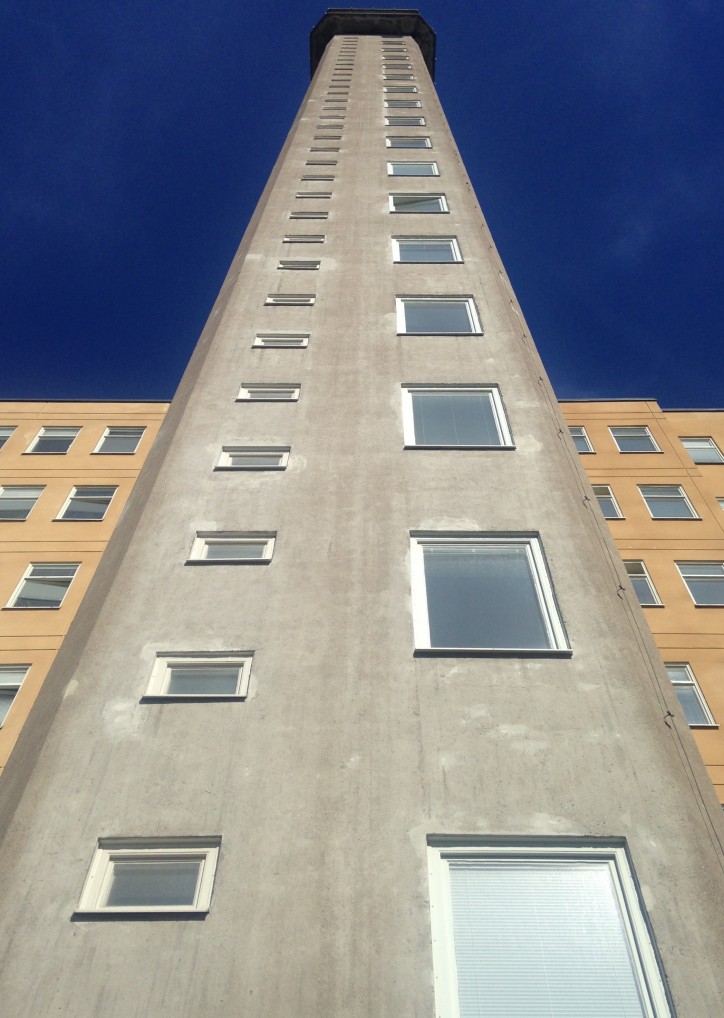 Resident feedback: ‘We love having the art school students sitting on the steps’ 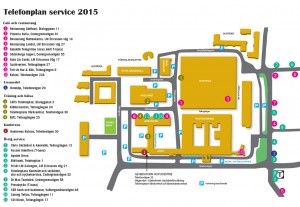 The telephone company Ericsson had a lasting impact on Stockholm, both as an enlightened employer with a social conscience and also as a developer of commercial buildings which defined neighbourhoods, including workers housing. Ericsson’s history mentions the ‘Ericsson spirit‘ – an idea about pioneering, informal entrepreneurism – a principle which is still referenced today in marketing literature about contemporary spaces at this regenerated campus-style development. During the 1940s, LM Ericsson completed a new factory in a Stockholm suburb according to modern functionalist principles, with adjacent homes also built: the so-called LM-city. Developer A P Fastigheter (now Vasakronan having bought out a publically-owned real estate company) – bought the site from Ericsson and leased part of it back to them in 2000. Ericsson has since gone, but the campus is now home to multiple new uses including an art school, student housing, IT entrepreneurs and some mainstream housing. More homes are also being built in the neighbourhood, at controversially high densities. (The 2004 masterplan included 2000 homes, with 1350 now complete: 1900 further new homes are now planned including the inevitable hotly contested tower). 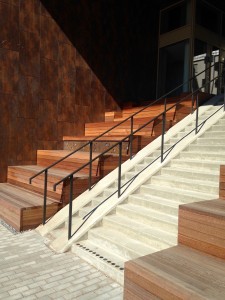 As Argent knows very well, bringing an art school to your regen project is a smart move: lots of creative young people generate an animated atmosphere as well as supporting cafes and other activity. The ‘normal housing’ residents I spoke to were almost always happy to have large groups of students eating their lunch on the majestic set of steps leading up to the courtyard of one new housing block; the students and residents have had to negotiate the invisible boundary in the housing’s ground plane which may not be crossed! Almost all of the new housing, including the landscape, on the Telefonplan campus is trying hard but not architecturally successful.  (The new primary school by Tham and Videgård is beautiful and the refurb of some of the industrial buildings to form the new art school is also very striking.) 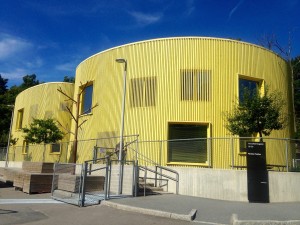 What feels more important to me is the authentic feeling of place which has been generated here. It’s an overused term now and beginning to be deployed by people wishing to confer on their schemes an air of maturity, but at Telefonplan the ‘spirit’ which inspired Ericsson is alive and well. The historic buildings are a crucial part of this, as well as the mix of users and uses (including a spectacular climbing wall), bold reversed-out signage, the adjacent woodland and the large campus-style site on which it all sits. The public realm is stark and odd: the spaces between the buildings are huge, with three different states: empty (with a promising feeling that something exciting will happen in the void), landscaped well with elegant trees, and landscaped badly with clumsy planting areas. Someone didn’t take enough control of this aspect, but it didn’t spoil the overall atmosphere. 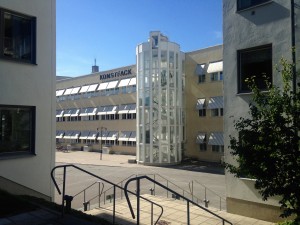 What Telefonplan also brought to mind was the idea of employer-led housing, like Bournville and Port Sunlight in the UK. Can and should we do this again? Could John Lewis develop homes? Business is simultaneously making a lot of money out of London but also moaning that it can’t recruit young members. Could big employers fund and even build dedicated intermediate rent homes? Flats could go to their younger workers in the centre of town, to be given up when they leave their job. Tell me what you think, or why this will or won’t work.

Thanks to Eva Bergdahl for suggesting this area and renting me the guest flat at North Hammarby.