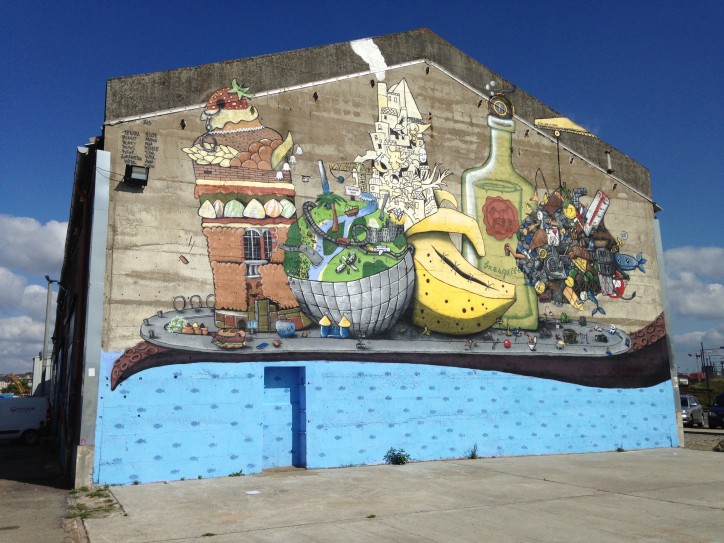 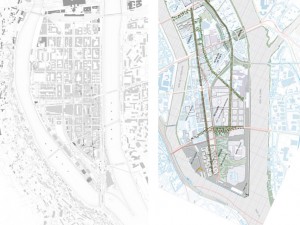 I’d like you to picture the Mayors of Lyon and Nantes sitting across a boardroom table in about 1995, when suddenly, one of them shouts ‘Snap!’ (or ‘Bataille!’, as they slightly long-windedly say in France). Nantes is halfway through a massive urban renaissance of a pointy island across from its main town centre, formerly used for industry (shipbuilding in this case). The comparison with Lyon’s Confluence is interesting, and highly relevant given the almost exact fit between the surface area, shape and challenges of Confluence and the western end of Île de Nantes. 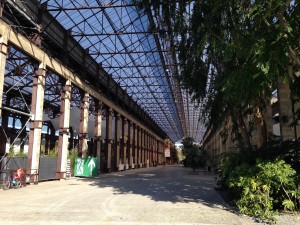 The café scene at the far tip of Île de Nantes is testament to the success of the regeneration at this end of the island, even though the caffs are a long walk from Nantes’ main drags. The industrial heritage has been substantially retained (at the behest of the locals and former workers) which works very well. My trip reached ‘peak shed’ this week as Nantes revealed its quite magnificent ex-naval buildings which are undergoing a gradual re-purposing, housing all manner of studious as well as light-hearted entertainment. The public realm which supports these sheds is sprawling, exciting and 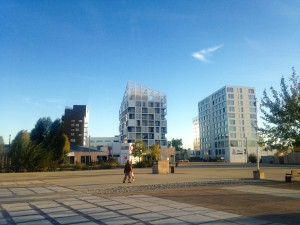 titivated with corten fixtures, bridges, cranes, judicious planting and artworks. So far, Nantes is winning the Bataille. It’s the housing where things go a little awry for me. One set of buildings on the north side of the island is near perfect: high density, sparing use of colour and cladding types, intimate courtyard spaces, varied heights and typologies – somewhere I’d like to live. The other ensemble is the start of a promenade of innovative housing, designed to bring families back to centre-ville in a mixed-use set of pavilions. It’s a very strange parade of buildings, to my mind stranded in a highly public area and not big enough to form a 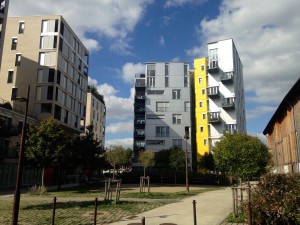 coherent neighbourhood. It really will feel like a zoo I think, when complete: I thought it must be student housing (which might be OK in terms of location and life-stage) until I visited the excellent exhibition at Hangar 32, where I realised it was not. The default French urban housing model it seems is a one or two storey podium, with pavilions above up to nine storeys, and gated as in London, though with more of a tantalising view through low fences into the inaccessible courtyards. Lyon’s Confluence housing is knitted more into the street scene, simpler, but showy where it needs to be. So perhaps we now have a draw. 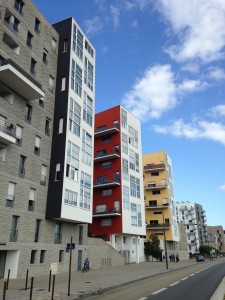 But the real problem lies at the east end of the Île, as the new Mayor and her refreshed design team have appreciated. Big island buildings (both housing and sports buildings) sit awkwardly against large expanses of road and leaky open space, with no real connection to one another. Materials used are cheap and there is far less operative café life here. The mixité hasn’t happened – and the tram didn’t make it over to the island, which has to put up with a bus instead – this feels like an error (and a win for Lyon). It seems right then that a landscape and mobility* approach is being taken to the second wave of development, through to 2030, in a bid to knit the 4km Ile together. 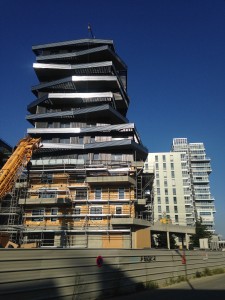 Nantes’ east side, on both sides of the river, is its downtown business district, where the inevitable big glossy towers (including residential) are sprouting in a new quarter with ‘Euro‘ as a prefix. Rather like in Bordeaux, there is an air of the casino about it: build ‘em high and flog ‘em quick before the punters notice they’re being had. The quality of the architecture is simply too variable (and often shrill) for such prime riverside in this beautiful city, with a couple of possible exceptions not yet started. I think I am going to start calling this kind of building/area ‘Real Estate’ to distinguish it from ‘Neighbourhood’. I understand that higher end housing has to exist – but does it need to announce and then separate itself quite so starkly?

PS: I put my nose into an EHPAD (older people’s housing, though relatively high end) which had the fabulous slogan ‘La Vie Continue Avec Nous’. Jolly good! The alternative isn’t that inviting…

*PS2: Francine Houben introduced me to the word ‘mobility‘ which doesn’t mean wheelchair access as it might in the UK. It means every form of hard and soft transport from walking, to bikes, to public transport to roads. On the continent, it is more normal to be a ‘mobility’ consultant rather than the UK ‘traffic and transport’ consultant, which says it all really! Let’s start using mobility: it makes everyone think harder about how people get around.