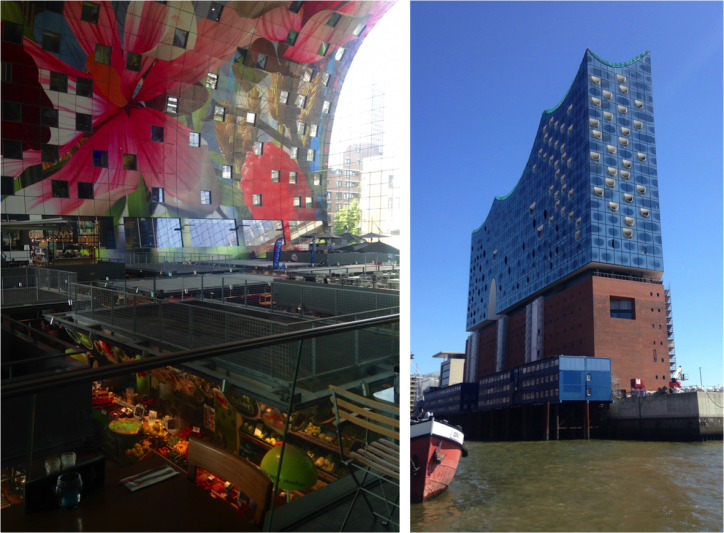 Why are you looking at a picture of a covered market and a concert hall? Because they are also housing. Both Rotterdam and Hamburg are undergoing inner city revivals, and their city commissioners have been rightly keen to promote mixed use rather than any separation of housing and other functions. 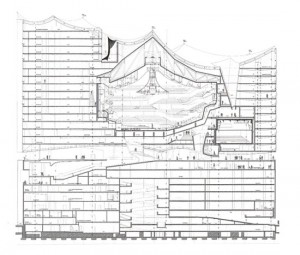 These two landmark buildings take the recipe a step further, adding ‘wow’ to the list of ingredients, and hoping that as signature architectural dishes, they will have the (now somewhat clichéd)
Bilbao effect. Architects absolutely love this kind of commission: the chance to create a new typology, and to show off their skill at both housing and a major public building (and much more: shops, hotel, you name it). But are all these uses compromised by the union? I couldn’t get close enough to Hamburg’s unfinished (and vastly over-budget) Elbphilharmonie to find out. The 45 homes there will undoubtedly fetch a premium which will assist with the cost overrun. (Hamburg’s nervous civil servants should take heart from Sydney Opera House whose tenfold cost escalation was legendary at the time but is now all but forgotten due to its iconic status). 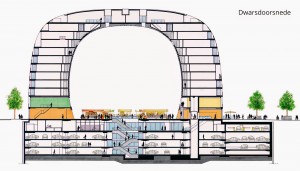 The enormous penthouses at the Rotterdam Markthal cost as little (sorry) as half a million pounds, but they too will help to cross-subsidise this scheme, also bringing much needed residential life back into the city centre. I understand from MvRdV that the developer, having taken quite a risk with this building, wants to repeat their party trick elsewhere – so the maths must have worked. The startling Markthal space was hot, close with cooking smells/atmosphere and (following a long debate), the residential windows do not open into it. The flats which have one of their aspects into the market space (especially at the centre) will inevitably be gloomier than those at the edge. Almost all 228 flats have sold or been rented, however, and at well above prevailing market rates. The list of technical and logistical challenges presented by a horseshoe-shaped apartment building covering a market-cum-restaurant should not be underestimated. But if you’d just done two buildings looking at each other across a square, that wouldn’t have been such a magnet (sorry again), would it…?

Thanks to Lachlan Anderson-Frank for showing 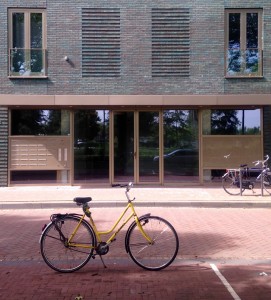 me the Markthal (much better photos on the web) and lending me the lovely bright yellow MvRdV bicycle.