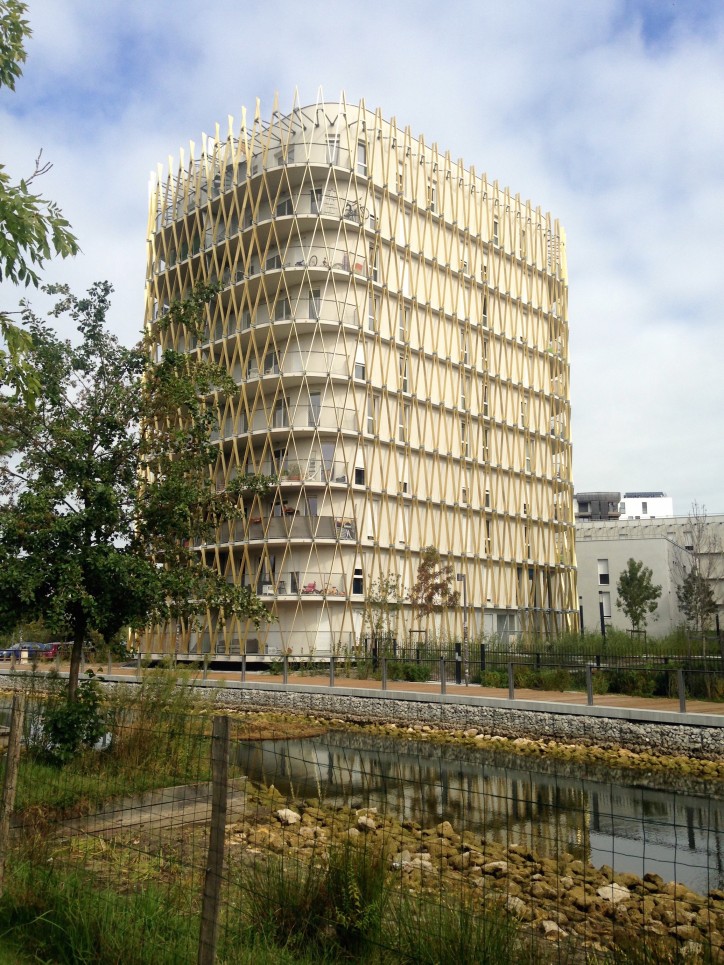 Resident feedback (Bassins a Flot):‘You might get a nice picture – but these are cages’ 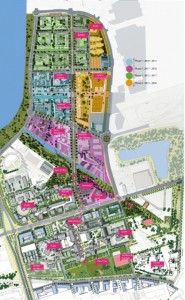 Bordeaux is extraordinary. And I don’t just mean the UNESCO-protected centre-ville, which of course rivals Bath or Oxford in terms of consistency, beauty and heritage. The post-war story of the city of Bordeaux could be framed as ‘A Tale of Two Mayors’. Jacques Chaban Delmas – Mayor for nearly 50 years – oversaw the creation of slab-block suburbs; today’s (perhaps more controversial) Mayor Alain Juppé has spent the last 20 years planning for Bordeaux’s expansion and reinvention on a quite massive scale. Of course, financial, political and technical challenges have set back the timetable of many of the mega-schemes, but somehow they are now powering on and the scale and speed of new building is overwhelming – not just for me, a dilettante visitor, but I sense for them as well. 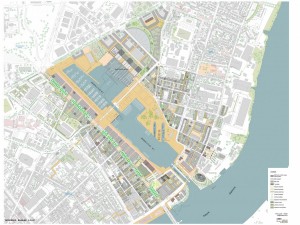 Like Marseille, Bordeaux is soon to be connected to more of the TGV network and Paris will only be 2 hours away. Major investors and developers are therefore not just circling, but committing: and they need to, because the plan is to add 50,000 residents by 2030 to the existing 240,000 in the city. The ‘Rive-Droite’ is the obvious focus: Bordeaux’s historic district is on the West of the Garonne river and the east side has until now been the ‘service area’, with stations, sheds, army barracks, marshland and various other industrial and dock uses. But the areas to the north and south of the centre on the traditional Rive-Gauche are also the subjects of enormous masterplans; all are linked by three new (very regular) tramways instigated by Juppé. Add bridges, riverside walks and well-invested new public realm to this scene and you have an impression of a city on the up and proud. 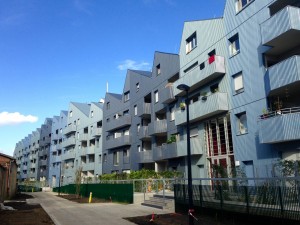 Trying to get under the skin of multi-site 20 year regeneration schemes in a couple of days is of course impossible, but particular aspects struck this two-wheeled observer. Speed is the first obvious issue. A couple of the schemes had stalled over the years, and my impression was that there has been a certain understandable impatience (politically driven?) to get some delivery, some visible evidence of investment and confidence. 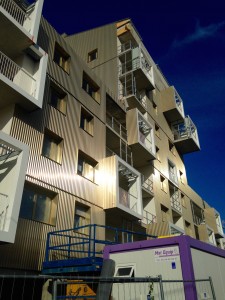 Bassins a Flots was a crazed tangle of about 15 building sites delivering 2000 homes all at once, with inevitably chaotic spaces in between – on a par with my Helsinki experience. The housing seemed initially stimulating from a distance, with saw-tooth roof profiles and industrial cladding creating an edgier aesthetic than much of the European carved-out feta cheese usually on offer. ‘You might get a nice picture – but these are cages’, came the acerbic comments of two locals over my shoulder, clearly not impressed with the new homes. ‘How can they make people live like that?’. The intense density (8 storeys prevailed and the 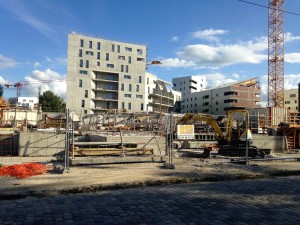 streets were sometimes very narrow, with little garden space visible) coupled with the ground floor mess, Heras fencing, raw concrete incompleteness or cheap-looking cladding made an unconvincing picture. A return visit will be necessary to this waterside district, including to the emerging sinuous Wine Civilisations Museum which will pose – like a rare-breed cat – at the foot of the dock. 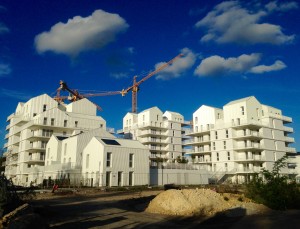 The lake-side 22 hectare Ginko (sic) Eco quarter to the north had echoes of Aspern and Vauban, a sudden and stark new tram-fed community at the city edge with high green aspirations. Vauban’s success was clearer to me having seen the twice-as-dense Ginko, which had not managed to create a lively high street despite having what seemed to be the same ingredients. My shoot-from-the-hip diagnosis might be that the tram lines seem to cut up the street rather than disappear into it, the shops are not being helped to succeed, there’s a lot of buy-to-let, and the community is knitting more slowly because its formation is rapid and developer-created 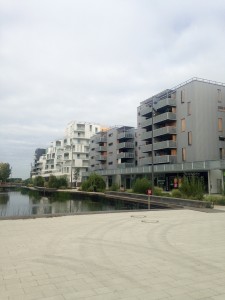 (Bouygues) rather than being the product of slow self-determination as at Vauban. Technical problems have drawn the Ginko community closer (as often happens when innovation exceeds capability) with engaged residents forming the ‘Ginko-Bilobiens’ and becoming expert in operating their green homes. The enormous lake (created in the 60s, an impossibility now due to ecological regulation) is cut off from the homes by a busy road which felt like a serious own-goal. Green space separates the area from its 70s neighbour Aubiers (as at Aspern), another dubious but familiar move, as highlighted by Dan Hill on this blog. A legacy 80s shopping park exists round the corner, and another one is now promised. They need to look at Vauban’s street-based retail to avoid further depopulating the scene. 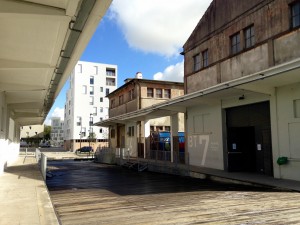 Inspiring ‘shed heritage’ was complete or under way at both Terres Neuves and Bastide Niel, the latter seeming like the most promising new quarter which will evolve under its unusual and contextual MvRdV masterplan (superseding, rightly, a formal axial idea by Bofill). The meanwhile uses in the former railway sheds at Bastide (a huge high-end food shop, café, skatepark and the rest) are clearly successful and bring to mind London’s Kings Cross. 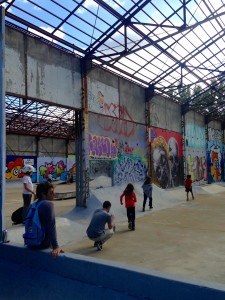 And like Kings Cross, both areas are piping in ‘student power’ to electrify their regeneration. The Terres Neuves housing replaces or reclads existing problematic 70s blocks, and is suffering (despite some interesting architecture by LAN and others) from some anti-social behaviour and cladding failures. This area too will need a revisit to see the completion of the public realm, but more intensive management is needed to ensure that this promising new quarter does not sink back. Perhaps the final, gigantic piece of Bordeaux’s puzzle will rescue 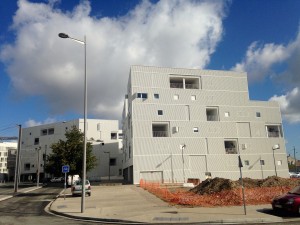 Terres Neuves: the corporately-dubbed ‘Euratlantique’ is the 738 hectare pièce de resistance within Juppé’s vision for the city. The still slightly seedy main station is set to be an important national hub, and grand plans are now in motion to polish up Bordeaux’s entry sequence for an international audience. Let’s hope the locals can still afford Bordeaux when the jigsaw is complete.

PS: No French housing jigsaw is complete without a fragrant bakery and a pharmacy, proudly declaring their wares from street corners. Some habits are timeless.

PS2: I saw some lovely architecture at Rue Henri Descot: access impossible due to the French penchant for gating. The balconies were solid and simple, the awnings were a fantastic bright yellow, the black cladding and windows were well-detailed and chic. I must go back.